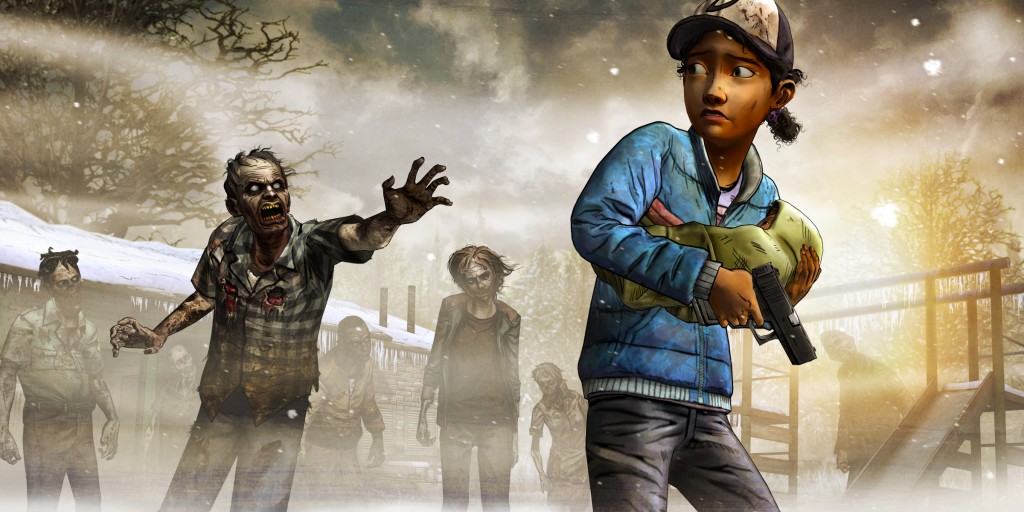 2014 has been another awesome year for Xbox 360 gamers. So many stellar releases to keep your console humming into the new year!

Since 2014 is drawing to a close, it’s appropriate to revisit the Top Five Xbox 360 Games of the year. Without further adieu, let the countdown begin…

#5: The Walking Dead: Season Two Episode 5- No Going Back

Synopsis: No Going Back is the 5th and final episode of the episodic graphic adventure The Walking Dead: Season Two, based on Robert Kirkman’s The Walking Dead comic book series. It was released by its developer Telltale Games for Xbox 360.

The episode begins with the group and Russians engaging each other in a gunfight. Clementine wakes up unharmed and dazed. Clementine looks around and sees Mike shot in the shoulder, who retreats to cover with Bonnie. Arvo is seen trying to resuscitate his sister, Natasha, who has been shot in the chest. Clementine then spots the baby laying and crying on the ground beside the corpse of his mother Rebecca. Luke shouts at Clementine to get to cover with him. Clementine tries to crawl towards the baby, and is almost shot. Clementine is confronted with the choice to either to save the baby or pick a safer route. A heart-wrenching choice to make.

Synopsis: Street Fighter IV was released in 2008 by Capcom, which co-developed the game with Dimps. It was the first numbered Street Fighter game released by Capcom since 1999, a hiatus of nine years. Street Fighter IV takes place several months after the events of Street Fighter II (thus is chronologically set between Street Fighter II and III). After M.Bison’s survival from his encounter with Akuma, the S.I.N. corporation began another fighting tournament in order to draw out the most powerful fighters on Earth to complete the BLECE project. Each character has their own reasons for entering this tournament, but S.I.N.’s real desire is to lure Ryu to them in order to analyze the Satsui no Hadō, believed to be the last piece of data needed to complete BLECE.

Synopsis: BioShock Infinite: Burial at Sea is an episodic expansion to the first-person shooter video game BioShock Infinite, developed by Irrational Games, and published by 2K Games. Burial at Sea is set after the events of BioShock Infinite, which spanned several alternate realities and was themed on the nature of choice. Whereas Infinite took place aboard Columbia, the floating air city set in 1912, Burial at Sea takes place in an alternate reality within the underwater city of Rapture, a year before the events of the first BioShock game (which is set in 1958). The game features Booker DeWitt as a private detective, and Elizabeth as a femme fatale who employs Booker’s services.

Synopsis: The Wolf Among Us is an episodic graphic adventure video game based on Bill Willingham’s Fables comic book series. It is developed and published by Telltale Games and distributed by Vertigo and Warner Bros. Bigby, the Sheriff of Fabletown, saves a young prostitute from an intoxicated Woodsman. Later that night, Bigby is shocked to find the woman’s head left on the Woodlands doorstep. Clues left with the head identify her as Faith, a Fable from Allerleirauh. Deputy Mayor Ichabod Crane orders him and Snow White to investigate her death. They head to the apartment she shared with her husband Prince Lawrence and find the Tweedles, Dee and Dum, snooping through it. They learn from Lawrence that they struggled to make ends meet and Faith took up prostitution to help pay the bills. Bigby leaves Snow at the Woodlands while he continues to trace leads. When he returns, he finds the Woodlands surrounded by police, Snow’s head sitting on the building’s steps.

Synopsis: Dark Souls II is an action RPG video game. The third game in its series, Dark Souls II was developed for Xbox 360 by From Software, which also published the game in Japan, while Bandai Namco Games published the game in other regions. Dark Souls II presents its plot in an unconventional way that makes it difficult to understand in one play through, and it has several unclear or unknown elements. In this way, the game encourages its community to share and review findings and interpretations with each other in order to fully understand it.

The story revolves around a male or female Undead human known as the “bearer of the curse”, who has nearly lost their mind and gone “hollow” in their search for a cure. They have traveled to Drangleic, which is rumored to be home to powerful souls that can help Undead regain their humanity and avoid this fate. The bearer of the curse finds their way to Majula, a settlement in Drangleic, where they meet an enigmatic woman known as the Emerald Herald, who acts as the player’s guide. She asks the player to seek four ancient beings with immense souls, and Vendrick, the king of Drangleic.

After reviewing this list, you’re probably considering giving these titles another whirl. Before you get into full gamer mode, how’s that internet connection?

If serious lag is a major annoyance during multi-player action, let CenturyLink help you reach high-speed internet nirvana. CenturyLink is launching speeds up to 1 Gig (1,000 Mbps) so you can power all of your devices at once. Check out availability HERE with this handy service locator. Treat yourself to maximum online gaming performance and play away into 2015!